To say the least we are very picky, when it comes to selecting a new herd sire for our purebred and commercial cows. We put A LOT of emphasis on the bull’s mother, her udder quality, feet and do-ability. It is the #1 criteria. We have worked hard to have our cowherd where it is and we won’t risk using a bull with a mother that is average. Then we look at the EPD’s.
We choose a bull we like first, then we look at his mother, than is pedigree and then his performance and EPD’s -in that order! 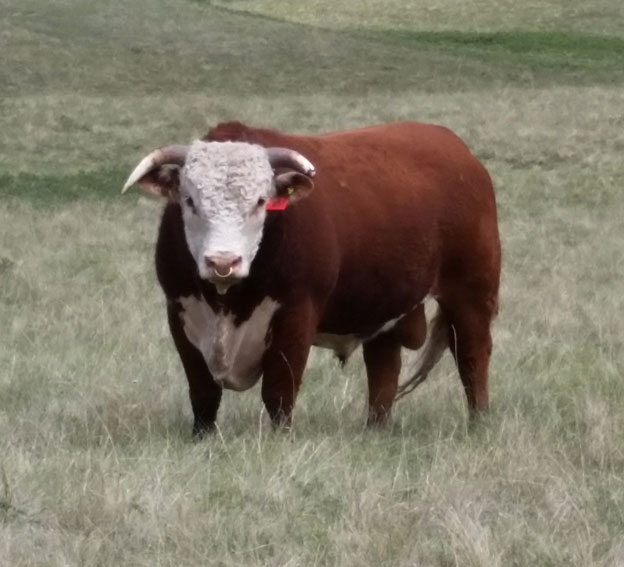 Purchased from the 2016 Calgary Bull Sale from YV Ranch, Nels and Terry Nixdorff. 12D has bred better than himself. His calves have nice birth weights, are hairy and pound the scales down. We have used him on our 9121 daughters and this breeding combination has been explosive.

Home Raised 2059 Son out of a pistol of a donor cow, Triple A Max’s Rebecca 22R. Bam’s is a moderate bull, but probably has the most muscle and thickness of any Hereford bull in the breed. He is a hard muscled bull that gets out an moves really well. He is a two time Agribition Champion Bull and a Top 10 Agribition Supreme Qualifier.

Purchased from Braun Ranch out of their 2014 Sale. 163A is a muscle bull with an enormous amount of length and thickness. He passes this onto his progeny. Plus, he is real easy doing and short marked. We have calved out three sets of daughters and they are really nice uddered, moderate cows that produce.

126E was purchased from Braun Ranch out of their 2018 Sale. He had a rough go breeding his first year, as he acquired foot rot in a front and back hoof that summer, but he did get his pasture bred and we have two sets of calf crops on the ground. The calves are hairy and have lots of grow to them. Very nice set. His first group of two year old sons sell this year!